Amy, on April 13, 2008, you left us, after being brutally beaten on the previous day. We hope that the monster that so savagely attacked you is unemployed, in prison, crippled with disease or otherwise in a state of complete and utter despair.

And shame on the people of St Petersburg, FL who offered him shelter, comfort, protection, silence or indifference to his crime over that period. Would like to thank the South St Pete community, of which the killer was a member, for its usual job in conspiring in closing ranks and protecting their own, rather than aspiring to justice. It used to really hurt that when I lay my head down on that pillow every night, that somewhere under that same dark sky, the monster that they enveloped in their protecting arms was free to do the same.

It is not the color of his skin which concerns me, but that of his heart. His heart is the blackest, most pitch dark place in the universe.

Florida seems to be notorious for inflicting harm on animals and children. Does Caylee Anthony ring a bell with anyone? When we first moved to the Sunshine State, the rape and murder of 9 year Jessica Lunsford was all the rage. Go to the following to see another example of the cruelty perpetrated by some sections of society.

Woman sentence to one year for killing kittens.

At least they caught this horrible woman. If the people of South St Petersburg had the same sort of character as the witnesses here, the killer of Amy would have felony animal cruelty on his record also.

We did have witnesses. At least they called 911. But then they ran away to leave Amy to die in the hot sun, so when the cops came there was no one to talk to. The chain was then broken and any chance to connect the crime to the suspect in the area evaporated. There are plenty of people in that area who know exactly who did it, but thanks to the “no snitching” policy, he is free to hurt another animal or human being today. The North St Pete types running away form trouble is St Petersburg in microcosm.

Did the killer complain to a parent, boast to a friend, confide to a girl? Of course he did, but the ‘no snitch’ policy where South St Petersburgers take more than their fair share, but don’t take any responsibility means that justice is not done.

If St Petersburg Police had devoted time and effort to investigation of the case, it would have been solved. Of course the main problem in solving a crime in St Petersburg is the signal to noise ratio. Crime is so high, that a dozen more will be reported in a few minutes and the old ones get swept under the carpet.

A cat that was killed in Canada got 6000 members of a Facebook group. We got 150. Shows the difference in quality of people between the two places. 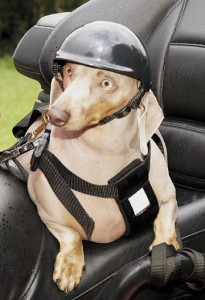 This was what I should have had my cat wearing that day when the South St Petersburger decide to rain blows down upon her. The only way to keep an animal safe in St Petersburg. A pet helmet. Ironically the model animal in this picture is a dachshund, which is what the perpetrator had on a leash the day that he attacked Amy.

Of course, when it is one of their own that falls victim, they have to resort to the police to get justice. Woman allegedly run over by ex boyfriend.